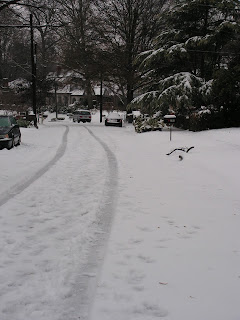 We are having a snow day.  Fortunately, this was one of those snows that was widely (and pretty accurately as it turned out) predicted and, perhaps because we had a snow a couple of weeks ago, people took it seriously for the most part.  Many of the schools and some businesses announced last evening that they would be closed today.  There was some real chaos on the interstate last night as the snow moved in suddenly and piled up quickly.  (It was convective snow, Weather Channel bloggers reported.  Thin bands of heavy snow like summer downpours drop lots of snow in a small timeframe.)  Which may have induced people to stay home today.  We got probably four or five inches at our house.... some say there were many inches of snow but the sleet and freezing rain reduced the total by half.

So everybody seems to have stayed home today, at least in our neighborhood.  Oh, of course some folks have been out there driving (no doubt some doing so out of necessity, and others doing it for fun) but the neighborhood has been peopled by walkers and sledders (on real Flexible Flyer types, which are extremely rare in Atlanta, as well as flattened cardboard boxes, recycling bin lids, and boogie boards).  I've never seen so many out sledding - but the snow was perfect for it.  There is a 5 inch base of fluffy snow topped with sleet/freezing rain which packed down the fluffy stuff into icy stuff.  The streets are very icy and it's thick enough not to wear through after a few trips - especially as some continuing fine misty freezing rain continued to come down.  Our street has a hill, too, and it has been busy with both kids and adults.

Still, even with the laughter and all the people outside, there is this wonderful quiet that comes along with snow.  It started last night during the downpour - the snow blanketed and muffled the sounds and with greatly reduced car traffic, all was calm and all was quiet.  I stood at the door looking out and listening to the quiet for a long time.  The last couple of days have been so jangly and disquieting, with the horrifying news stories coming fast and furious out of Arizona, the plane crash in Iran, another shooting in Baltimore, floods in Australia and South Africa, an on-fire envelope in D.C. and explosions in Maryland, and the rape of a disabled woman in os Angeles.  But the snow, for a few hours anyway, put a white blanket over all that.  I thought about the last scene from Joyce's short story The Dead, in which the character Gabriel watches the snow as he ponders something his wife told him - about a lover she had who perhaps died for her - and understands he never had that kind of love for anyone, including his wife.  It's not clear what this epiphany means for him, but Joyce says, "His soul swooned slowly as he heard the snow falling faintly through the universe and faintly falling, like the descent of their last end, upon all the living and the dead."

This morning, out walking, with ears covered to keep out the cold, it was even quieter in that "out walking in the snow with a toboggan over your ears" way.  The crunching underfoot and the metallic sliding sound of sled runners skimming over the ice made up most of the noise.   Just walking with no particular time or destination in mind - but the right clothes and footwear - was a pleasure.  The snow provides a sound damper as well as visual quiet, covering up the unraked leaves, the curbs, the flaws in the landscape that allows other things - bare branches, red berries, cardinals - to stand out in stark relief.

I guess when something special like a rare real snow day in the South happens, it's easier to put aside whatever else was on the agenda and take advantage of the day.  Relax, wear fuzzy clothes, forget about that project or those chores.  Even if one doesn't actually go out, it becomes a good day to make soup or chili and tea or hot chocolate - everyone seems to participate in some way.   It's a mostly positive collective experience (unlike, say, hurricanes).

Of course, by tomorrow, people will be getting antsy.  It's one thing to take one day off, but another thing for it to drag on, especially if some roads become clear and people really do have to get to their work or to the store or to check on their elderly parents.  Then the hassle begins.  Kids will become whiny, adults will fret about whether or not they ought to drive to the office, moms will mop the foyer for the fifth or sixth time with a distinct sigh, everyone will be tired of soggy socks and gloves.

But today has been lovely, a day to practice letting go and leaning into the day.