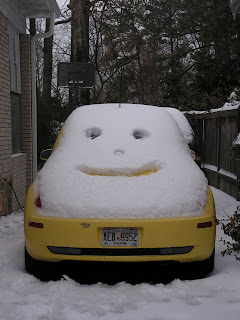 Many years ago, when my children were much younger, we went to North Carolina to visit my mother during the school holidays, just the three of us.  I forget what my husband was doing and why he couldn't go, but that was not unusual anyway.  While we were there, it snowed during the night before we were to leave, a pretty big snow for eastern NC.  If we could get east over to I-95, the roads would be pretty clear all the way, but in the meantime, we had a 40 or 50 mile trek through snow-covered roads in the country.  Probably because of school (I think the kids may have been 7 and 3), we needed to get back.

We loaded up the minivan and headed east.  After only ten miles or so, the snow on the roads got deeper - it looked like about 6 inches.  I wondered, to myself, if we were doing the right thing.  I tried to remain focused and calm but I did check in the rearview mirror frequently, worried that the kids might get worried.  Of course, they weren't worried; they were absorbed in their picture books or snoozing.

While I was wondering and glancing in mirrors to take in the surroundings, both inside the car and out, I suddenly noticed that I was driving in vehicle tracks through the snow.  Up ahead, thirty yards or so, was a small red truck, sort of beat up looking, with a couple of guys wearing baseball hats inside, forging the path.  I don't know where they came from, but there they were.  We drove behind them at an appropriate distance and speed for twenty five miles at least.  I was still on alert, but felt much safer having a clear track in which to drive through the mess and somebody ahead to keep me from even thinking of driving too fast.

As we were coming out of the snow covered area and on to dry roads, I felt myself relaxing.  I glanced in the rearview mirror again.  The kids were asleep; we'd been on the road about an hour and a half and it wasn't even lunchtime yet.  When I looked ahead again, the red truck was gone just as suddenly as it had appeared.

I said a prayer, "Thank you God for those angels," and drove on.