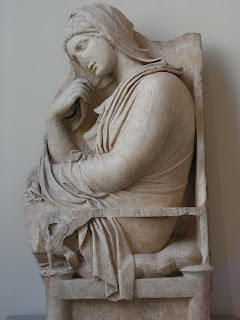 I have books on my mind today, for several reasons.

First, the news this morning reports that Reynolds Price has died.  I loved Reynolds Price; for one thing, he grew up just a few miles away from where I grew up and lived and worked his whole life (except for his three years at Oxford) in North Carolina.  For another, he wrote good novels, mostly about people from my neck of the woods.  I loved Kate Vaiden and Roxanna Slade, particularly.  And he was very interested in Biblical scholarship and wrote about that, too:  A Palpable God was his own translation of thirty Bible stories from both the Old and New Testaments along with essays about the power of narrative, and Three Gospels was his own translation of John and Mark together with a third, original "modern Gospel."

Price was one of those old fashioned "men of letters" - learned, curious, passionate about storytelling - who brought his considerable intellectual skills to bear on his mission not only to teach students about the great stories of the world and how to be great writers themselves (Anne Tyler was one of his first students), but to reach outside the academy and offer his stories to the world.  He was also a survivor of spinal cancer, treatment for which left him in a wheelchair for the last thirty years.  Price was not a church goer (perhaps he figured the church would not welcome an intellectual, outspoken homosexual) but clearly spent a lot of time with Biblical texts.  He taught classes on the New Testament and assigned students to write their own Gospels, as he did.  The New York Times lovely obituary is here.

The other reason I'm thinking about books today is because like many people who love to read, I belong to a book club, and we met last night.  Because most of the members are busy women with at least some children still at home (and several work outside the home as well), we only meet every other month during the school year and once over the summer.  This has its plusses and its minuses.  We meet infrequently enough to be able to do other reading besides the assigned book (which is particularly good if you hate the book you're supposed to be reading).  But sometimes scheduling conflicts mean that some members don't make meetings for months on end.

Like many book clubs we also are heavier on the wine and cheese and discussion about what colleges the kids have applied to or the exotic vacation for the twentieth wedding anniversary one couple took than we are on the discussion about the book.  Sometimes several folks haven't read the book, or read it so long ago that they don't remember details.  But, whatever.  The rule is that if you haven't read the book, you might hear spoilers at the gathering if you come anyway.  We also spend time talking about what other books we have read/are reading and make recommendations about them.  (Last night, one of our members brought a children's ages 8-12 book called "Poop Happened:  A History of the World from the Bottom Up."  It got great reviews, not only by our friend but over at Amazon.)

I suspect that the truth is that our book club is a deliberate attempt to gather a circle of friends who like to read and visit with one another but/and need a schedule and a purpose to do so.  Most of us have known one another since our children were in preschool (together) but we no longer travel in that orbit.  Everyone is busy.  But book club becomes a way to stop being busy for a couple of hours.

Last night we met to discuss Wallace Stegner's Angle of Repose.  I'd read it many years ago, and I meant to flip back through it or at least read some review on Amazon to remind myself about the story, but I never got around to it.  Enough people had read the book to have a decent discussion, and things came back to me as I listened.  But the beauty of the evening was sitting by the fire with a glass of wine and a couple of brownies (alternated with steamed asparagus with a really wonderful tart dip) with women I've been friends with for twenty years.

Being scheduled almost to the hilt (or worse) seems to be a way of life for most of us.  Dropping by the neighbor's for a cup of coffee is a thing of the (probably television - I'm thinking Lucy and Ethel) past.  So if book club is a pretense for just sitting around together, so be it.