A Sermon on the Feast of the Holy Name 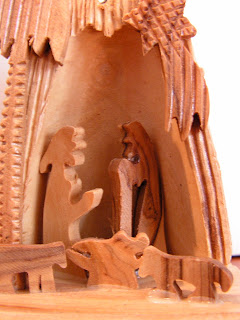 Today, we are celebrating the Feast of the Holy Name.  Eight days after a Jewish boy is born, he is to be circumcised and named, and if he is the firstborn, redeemed or bought back from the synagogue.  For a long time, this feast was called the Feast of the Circumcision, but now we call it The Holy Name.

This is not an arbitrary change:  it is true that the circumcision of the son of Mary and Joseph takes place on the eighth day, which shows that Jesus was born into an observant Jewish family, but the Scripture also wants to point us beyond the circumcision and toward the significance of Jesus being named and the significance of Jesus' name itself.

Names are important.  In the ancient world, to know someone's name was to have some kind of power over them.  Ancient literary heroes often went about in disguise to do their work without being beholden to any who knew their names.  Just as Adam named the animals that God put before him to be his fellow inhabitants of the earth, so too Jacob demanded the name of the stranger with whom he wrestled during the long night.  Moses felt that he couldn't just go down to Egypt and demand that Pharaoh "let my people go" without knowing who the "me" was - and that he might better get the point across by dropping a dread name.

In the Hebrew Bible, God has many names.  El Shaddai, Elohim, Yahweh - God Almighty, The Lord, The Lord God - and The Great I AM.  One time God even opens an introduction to Abraham by saying "I am your Shield," and other times God simply says, I am the God of your ancestors, of Abraham and Isaac.  Of course God without the capital G is not exactly a name, it's more of a category.  It's kind of amorphous as a name, really.  Like my pets, who are unimaginatively named Bunny and Kitty.  God really seems rather coy, in the Hebrew Bible, about having a specific name or at least letting that name be known.

And so, think of the remarkable story of Hagar, the servant of Sarah.  Hagar was kicked out into the wilderness with her son Ishmael only to be found and mercifully saved by God.  Hagar did the unthinkable by giving God a name - El Roi, the God who sees me.  She's the only human Biblical character who dares give God a name.  I get that, though, because we want to know who we are dealing with, we want to know who it is with whom we share our lives.  Especially when we are in dire straits and needing salvation.

The allure of the mysterious stranger notwithstanding, we put a lot of stock into names.  Pregnant couples pore over baby name lists to find just the right name for their expected child - a name that perhaps has some significance - a family name, or the name of a special place or even a song or a fictional character.  Or a completely unique name complete with unique spelling.  (I  once knew a young woman named Skye - S-K-Y-E.  Her parents were John and Mary Jones - and they were determined to give her a special name.)
When I was pregnant, my husband and I had a list of potential names, but we were certain that we needed to see the baby first to make sure the name fit.  This worked out well with our first son, but when our second one was born and he looked exactly like his brother, we were perplexed, and it took us a few days to settle on the right name, given that we couldn't name him the same thing as his brother, and Winston Churchill, whom most babies, including ours, resemble greatly, didn't seem to be quite the right choice, either.  We know something about people when we know their names.

Mary and Joseph had neither the chutzpah of Hagar nor the luxury of my husband and me.  They were told in no uncertain terms what this child's name was to be.  The Angel Gabriel, speaking for God, named the child before he was born, and the name was one of special significance.  It was a prophetic name, a name signifying that this child would become the savior of the whole world; it's a combination of the Hebrew words for God and Salvation, and we understand (as well as we can understand such a thing) that this means that Jesus is God is Salvation.

This child was named not as a means to identify him as the son of Mary and Joseph but to identify him to the world as its savior.  He wasn't just to BE the savior but he is to be CALLED Savior.
In our world, to know someone's name often means that we have a relationship with them. Otherwise someone is just someone - some guy, some woman, some kid, or perhaps some jerk.   Many of us in the church deal with people who are just called by categories - homeless, addict, mentally ill, poor, prisoner.  But they all have names, and most of us have learned that when we know their names and they know ours, the relationship shifts.

I once worked at a church where there was a homeless woman who hung around a lot.  She sometimes would sneak inside before the doors were locked, and she would hide until everyone left so that she could sleep indoors on cold or rainy nights.  The first time I encountered her, I introduced myself to her and she told me her name as well.  I always tried to use her name, both when speaking to her and when speaking about her.  It made me remember to deal with her as a person with a name, a person whose dignity I am called to respect, a person in whom I am supposed to see Christ, a person named Gloria, not just a homeless woman or, worse, a nuisance.  Because when we know people's names, we may pause before making sweeping generalizations about any category of people when we remember to think of the ones we know by name.

This way of thinking works with our trying to understand God as well.  God may have been coy with Moses and Jacob and Abraham about God's name, but what we Christians say we know about God is what we are shown by the one named Jesus.  Jesus makes God known to us in a way that is more accessible and personal.  Jesus, God incarnate, does what God does but acts within our own human experience, including eating and sleeping and having friends and having a name and a family and experiencing pain and grief and suffering just as we do.

I dare say that if we try, we discover that the Glorias, those we may think of in terms of categories, share many of these same human experiences as we do, too - eating, sleeping, family, pain, grief, suffering, friends.

And, just as God gives names to certain people, so the Gospel tells us that Jesus is the good shepherd who knows his sheep by name and who calls to his sheep and they answer him.  We see this play out in the story of Mary Magdalene, when she encounters Jesus at the empty tomb, and he calls her name and she knows him.  Or when Jesus calls to his friend Lazarus and Lazarus comes out of the tomb, still wearing his burial cloths.

Through the incarnation, we are invited to get to know Jesus as a little helpless child, born in unfortunate circumstances, needing love and care as all newborn babies do, who has a particular name and a particular story.  And we are assured that Jesus knows us, too, as helpless humans who cannot save ourselves even though we try mightily to rely on our own strength instead of God's.
But through Jesus, God lives in our own stories, too.  Jesus knows what it is like to be helpless and knows each of us by name and knows our particular stories, in hopes that there will be days when he will call to us and we will answer, here I am.

The incarnation is not to sentimentalize God with the whole warm and fuzzy baby in a manger thing.  The incarnation is Almighty Lord God's own doing to show God's love for humanity.  God became like one of us so that we might become like God.  That's pretty awesome.  The point of the incarnation is our transformation, not that we get a new playmate or buddy.  But it is also true that the incarnation brings us closer to God and God closer to us by gathering us into the family in a new way, as Paul says in his letter to the Galatians.  We are children together, calling God a new name that Jesus reveals to us as well - Abba, Father, Daddy.

Being part of a family has its own joys and rough edges, as perhaps some of us have been reminded during the Christmas holidays.  We have responsibilities to one another as family even as family is also the place where when you go there they have to take you in, to paraphrase Robert Frost.  There is this part about acceptance as well as a part about understanding what it means to live in community. Jesus came to show us that, both the acceptance and the recognition that we are not free to always do as we like if it means we disregard others and their needs and their dignity.  Jesus came to us as God with a name, a particular and special name, that means we are saved,  are reconciled to God, we are beloved of God, our own Abba.

Of course, God is bigger than any name we can give God.  Hagar's suggestion, God who sees me, is great, but not all-encompassing.  God is more than the one who sees us.  God also wants us to see, too.
To see what God is like through the words and actions of Jesus.  And, among other things, to see that homeless women have names, that mentally ill men have names, that even people who act like jerks on the highway have names and they are part of the family, too, who long for wholeness and forgiveness themselves.

And so Jesus was brought to the temple to fulfill the prophecy:  Mary and Joseph confirmed what the angel told them and named the baby Jesus is God is Salvation.

This is the name of the blessed one who teaches us how to see God and how to really see those whom God loves and calls by name.