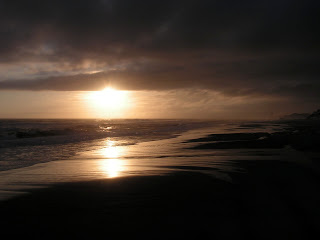 I just read Ian McEwan's latest novel, Solar.  I'm a big fan of McEwan and have read most of his novels.  I haven't liked all of them but I have enjoyed reading them.  Not all the reviewers I read praised this one..... the protagonist is not at all likeable and sometimes there seems to be too much dense scientific language, some say, while others agree that the main character is the only one who is really fleshed out (literally - he's quite large) but is annoyingly unpleasant and unsympathetic, plus the plot relies on borrowed jokes and is rather light.  An interesting concept - dense language filling out a light plot.

But there you are.  One simply has to sit back and marvel at McEwan's ability as a writer, whether you like what he writes or not.  The way one can watch sports and marvel at the other team's star player without bitterness as he or she rips through your team, maybe.  I marveled at the book but like everyone else, I didn't care for the protagonist, Michael Beard.

McEwan is an avowed, but not a ranting, atheist.  Unlike Dawkins, Hitchens, et al., he doesn't try to find new ways to go on television to rail against a straw god that most thoughtful Jews or Christians I know don't believe in either.  Like many people (religious or not), he sometimes treats religion as monolithic and is disgusted by "religious leaders" who suggest that somehow God was working in mysterious ways when this or that disaster struck as if they speak for all religious people.  He wishes to be spared the god whose mysterious ways were intertwined with the events of September 11th, for example.  (See his interview, in which television sought McEwan out to speak about his atheism, on Frontline here.)

And so what I often see in and find fascinating about McEwan's books are his working through what are usually considered religious themes - atonement, as the title of one of his most popular books, being the most obvious one, but also redemption, the power of love, and evil - in a world that is all about people but without any God.

McEwan simply isn't going to let evil be sloughed off on some supernatural power.  He wants us to understand that evil is done by people and that if there is a god, it's an indifferent god as he calls it, one that stands by and allows the Holocaust or the genocide in Rwanda, that either cannot intervene or refuses to intervene.  This is not a new question at all.  It's pretty much THE question for believers and doubters alike.  What kind of God is this, who either is powerless in the face of evil or refuses to act to stop it?  (That's a topic for another post, really.)

No, it's all people he says.  That's all there is in life.  What amazed him about people and life is how so many people, when they knew they were about to die on September 11, were determined to call their families to say, "I love you."

And so for McEwan, evil is done by people, and the world bends to their wills where they are able to exercise their power to do evil and other people are victims or innocent bystanders.  There is a very dark side to human nature, he says.

But good is done by people, too, he acknowledges.  People love each other and this is the good thing in life.  It must be the biggest thing in life, in fact; he wrote in an article about September 11, "Love was all they had to set against the hatred of their murders."  And love is transcendent somehow, even in the face of death.

[Sidebar:  Mr. McEwan hasn't asked me, but I don't believe that God had anything to do with September 11th or the Holocaust, and yes I too ponder the mystery of a God who does not seem to intervene to stop such horror.  This part of our story is truly a mystery.  Ask Elie Wiesel.  But I also believe that in the end, love is all we have against evil and death, too, love transcends death, love takes us into the heart of God who wipes away every tear.]

Now back to Solar.   Michael Beard, the unlikeable protagonist, is not evil.  But he has a dark side.  He doesn't know how to love, and he goes through life using people and coasting on the accomplishments of others and feeling entitled to as much food, booze, and sex that he can get.  He resists love, actually, turning away the love that is offered him again and again.   He absolutely does not wish to have children, seeming to understand that a child might get to him in a way that nobody else ever could.  And so he sinks further and further into the mire, finding himself moving between the things he feels he simply must have - food, booze, sex, and also recognition of his power - and leaving all sorts of human casualties in his wake.  Because he cannot love and he cannot accept the love that would give his life meaning.

Critics have mentioned that the conclusion of the book seems rushed.  It is true that everything finally catches up to Michael Beard in the last fifty pages or so.  He simply could not go on the way he was forever, it was all going to catch up with him, and it does quickly.  But at the very end, there is this tiny, tiny glimmer of redemption.  I won't tell you what it is, in case you want to read the book, but the last word of the novel is "love."

Now, a last word.  Some of my book club friends hated Jonathan Franzen's The Corrections.  They didn't like any of the characters; several of them never finished the book.  And so they missed the redemption.  There's this thing about redemption.  We like it when it's about us and the people we like, but we don't feel the same way about slogging through the long story of meaningless and destructive life and then at the end the sudden redemption of people we don't like.  This is a struggle for many Christians - God loves those we don't love or even like.  Michael Beard, of Solar, is not likeable.  But the last word is love.  And love is salvation.